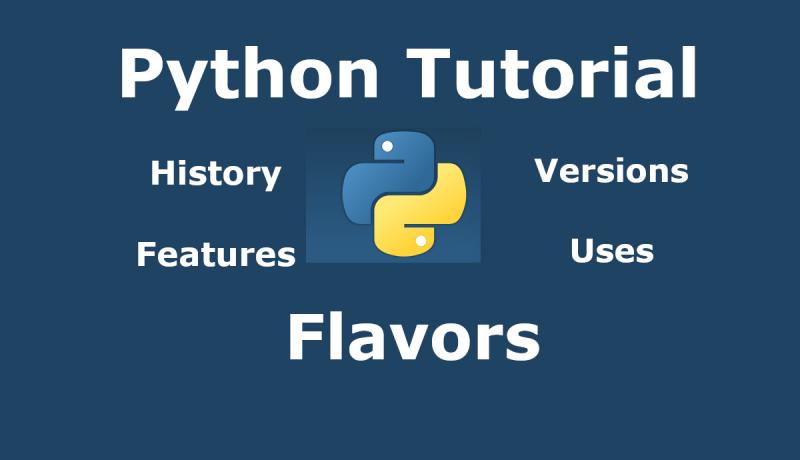 Python is a high-level programming language that is procedural, functional and object-oriented. Python has been on the rise in the list of popular programming languages that include C, C++, Java and more. Let us know more in this Last Minute Python Basics Tutorial on History, Features, Versions, Implementations and Uses.

Python was developed by Guido Van Rossum in late 1980s. The first version of Python was released in the year 1991. Van Rossum was inspired by the ABC programming language that led to the development of Python. Python Logo contains two cartoon snakes lying side by side facing up and down. The name python was adopted from a BBC TV show "Monty Python's Flying Circus".

Python is both a scripting language and a programming language. Python programs are usually concise and less number of lines of code is enough to implement any complex task. Its counterparts, C and Java languages significantly add tens of hundreds of lines of code.

C and Java developers find it very easy to learn the basics of Python programming language in no time.

The most popular version of Python used by the developer community is Python-2.7. It was released on 2010-03-03. But the support for it was officially ended on January 1, 2020. Python Software Foundation released many new versions under Python-3.x. The very first Python-3 was released on December 3, 2008, under Python-3.0.0. Here also the old versions 3.5 and below were discontinued.

New Python developers can directly learn and work on Python-3.6 and above versions for better support and adoption by the software companies.

Flavours or Implementations or Variations of Python Compiler

CPython is the default python compiler shipped by the Python Software Foundation (PSF) for developers. It is written in C language. So, it supports running C and C++ programs too along with Python programs. Its PVM (Python Virtual Machine) uses an interpreter (turns byte-code to machine-code) to run the program. So, it is slow.

This Stackless Python compiler is designed to handle multiple tasks attached to a single thread efficiently.

This IronPython compiler allows running the python programs on the .NET (DOT-NET) Common Language Runtime. So this compiler runs .NET programs too.

This Jython compiler allows running python programs on a JVM (Java Virtual Machine). So a Jython can handle both Java and Python programs.

There are other noteworthy Python compilers like Pyrex, Pyjs, Nuitka, Grumpy etc.

Python language has become very popular that it has been introduced as a subject for Class-11 students in India. It is used in a variety of sectors across the globe.

Category wise uses along with packages required are listed below.

We choose a CPython compiler though out this Last Minute Python Tutorial.

In the coming chapters, you are going to learn the basics of compiling and running Python example programs using the Windows 10 operating system.

Share this Python tutorial with your friends and colleagues to encourage authors.